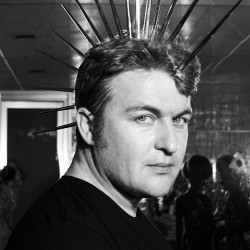 Oleksiy Zalevskiy was born in Kyiv in 1974, in 1993 he graduated from Odessa Theatre Arts Technical College getting the profession of a makeup artist and puppet artist.
1993 – the first collection 'Passion for a Bottle'.
1995 – the first award at the festival 'Admiralteyska Golka' ('Needle of the Admiral', Saint Petersburg)
1997 – the first fashion show within Ukrainian Fashion Week. The start of regular seasonal ZALEVSKIY collections.
1999 – the National Award 'Kyiv Pectoral' for the direction and costumes for 'Town of Masters' performance
Since 1999 – a jury member of UFW contest 'Look into the Future'.
2000 – foundation of Z-event event studio. Cooperation as a director and a co-organizer of fashion projects ('Black Pearl', 'Pearls of the Season', 'Kyiv Runway' etc.)
2002-2007 – a co-presenter of a popular TV show 'Chance'
Since 2004 – a member of Ukrainian Fashion Council – the national association of Ukrainian designers.
2005 – launch of the second line 'Z by Zalevskiy'.
2006-2008 – a co-author and curator of a charity project 'Fashion Aid' of Olena Franchuk Fund providing assistance to people with AIDS
Since 2007 – constant show director of UFW Holiday Fashion Week (Оdessa)
2008 – participation in Washington Fashion Week. участь у Вашинґтонському Тижні Моди. Design of the box for Glamour cigarettes, design of accessories for TM Glamour. Design of the uniform for the supporters of the National Olympic Team (together with MTS).
2009 – launch of 'Zalevskiy' photo album. Creation of costumes for 'Vyshnevy Sad' ('Cherry Garden') performance by A.P. Chekhov in Rivno Academic Theatre. Cooperation with Russian and Ukrainian TV channels: style and costumes for 'Fight the Blondes' ('Хто проти блондинок') TV show (Novy channel, Ukraine) and 'Desperate Housewives' (RTR, Russia). The director of 'Star+Star 2' project (1+1 channel, Ukraine).

Oleksiy is not only the designer of his collections, but also a magnificent show director of all his fashion shows. His bright outstanding shows shock the public and provoke a vivid interest of mass media representatives, who call him 'the king of avant-garde' and 'infant terrible of Ukrainian fashion'. The supporters of Olexiy Zalevskiy talent are bright outstanding personalities who know what they are worth of, who are self-confident and who are not afraid of attention of the rest to their personalities.