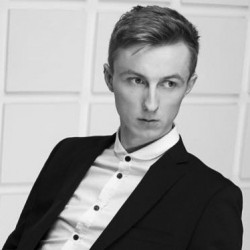 The fundamental education and real connection between theory and practice let the brand's designer Sasha Trofymenko make a serious claim among Ukrainian designers at the very beginning of his career. A clear understanding of the strategy of the trademark's development, a selective attitude to the ways of the brand's promotion as well as Western school of the cut, cloth and quality are the key components that differ him from the rest and let compete with them.

The designer has been living and working in Italian Sardinia and Kyiv. Today the designer can boast with 5 years of studying in one of the most prestigious fashion universities Istituto di Moda Burgo and internship at Roberto Cavalli. The very debut of Sasha Trofymenko took place last fall when he presented his first full womenswear collection under TROFYMENKO brand within MBKFD, Ukraine. After the show many mass media sources called Sasha 'the opening of the year'. The show was opened by Top-model Alla Kostromicheva.

Despite the youth of TROFYMENKO brand clothes and accessories by Sasha Trofymenko can be noticed already on Ukrainian and Italian fashion lovers tending to become the heroines of secular chronicles. The brand is proud of such clients as Katya Osadcha, Marysya Gorobets, singers Alloise and Olga Tsybulskaya. It isn't difficult to join the constellation of the admirers of a truly Italian-style TROFYMENKO collections. Today elegant dresses and accessories of the brand are available in Kyiv boutique S4astie, Italian boutiques Volonté and Clara Sunjust, in Kyiv studio of the designer and in the designer's showroom in Sardinia. Though the designer himself spends a lot of time in Ukraine, his creative team of constructors and seamstresses is based in Italy. Modern technologies help the designer to take active part in their work every day and to control the quality even on a distance.