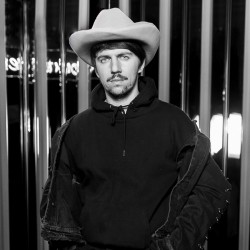 Ruslan Baginskiy is a Kyiv-based brand founded in 2015. Deciding to revive the culture of wearing hats, the designer Ruslan Baginskiy began to make classical fedoras and straw canotiers inspired by archive photos of stylish Ukrainians of the early 20th century. The aesthetic basis of the brand is a laconic design, with the touch of the author's details - handmade embroidery, pearls, and RB monogram. All these make Ruslan Baginskiy hats recognizable among fashionistas from NY to Paris and in Kyiv.

In 2016 the designer created a baker boy cap, and just in one year, it became the most popular accessory among celebrities, bloggers, fashion influencers and many others. Hat, which remains relevant outside of the trends and time of the year, is loved by the most famous models, singers, actresses and bloggers - Madonna, Gigi Hadid, Bella Hadid, Taylor Swift, Kaia Gerber, Joan Smalls, Rosie Huntington-Whiteley, Pamela Anderson, Irina Shayk, Lena Perminova, Olivia Culpo, Elsa Hosk, Romee Strijd, Sofia Richie, Adwoa Aboah, Paris Hilton and many others.