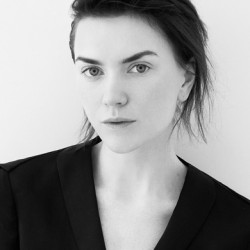 LITKOVSKAYA is a womenswear brand founded by designer Lilia Litkovskaya.

Known for her taste for bold shapes, refined tailoring, and craft, Lilia Litkovskaya explores the idea of contemporary dressing through sleek yet quirky silhouettes that details bring alive. Deconstructing the very concept of modernity through tailoring and brutalist touch, she offers a radically realist wardrobe for today’s women.

Four generations of her family were tailors, but her own path started from 2006 – that’s when she began creating seasonal collections in collaboration with other young designers. In 2009 she launches namesake brand LITKOVSKAYA, the first collection of which was presented within Ukrainian Fashion Week.

In 2013 LITKOVSKAYA is listed among 200 most promising designers worldwide in Vogue Talents list initiated by Vogue Italy. Named Ukraine’s “Designer of the year” in 2009 and 2019 at the ELLE Style Award, she has also been awarded the Best Fashion Awards in 2011, 2014 and 2015 by the Ukrainian Fashion Week board and Cosmopolitan Awards (2019).

She is now showing her collections in Paris during womenswear. LITKOVSKAYA’s collections are presented in stores of 14 countries, including Leclaireur (France), Harvey Nichols (Hong kong), H.Lorenzo (USA).