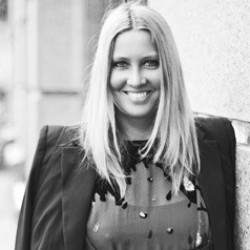 Larisa Lobanova - is a pure personification of underline femininity, sophisticated elegancy, and inborn aristocratism. Refined sense of style and talented improvisation combined with a keen sense of humor and healthy self-irony - allows her to create radiant collections, filled up with colorful images of a modern woman. Every collection of Larisa represents a concept which demonstrates the chain of images and reflects a certain mood of the designer. From season to season the mood of the collection changes, demonstrating the versatility of character of the creator It has been 15 years since, Larisa Lobanova started her professional career in fashion.

From 1994 to 2005 Larisa worked as a stylist, taught fashion history in various model agencies in Odessa.

From 1998 to 2005, Larisa created collections that represented the Ukrainian Trade Mark 'Shustov'.

In 2004, Larisa won the ‘best designer' award given by ‘Afisha Odessa' magazine By gaining a substantial background of practical and professional experience.

In 2005 Larisa opened her first Fashion Atelier under her own brand.

In 2007 Larisa became a permanent participant in the Ukrainian Fashion Week and also, participated in Moscow Fashion Week.

Collections of Lobanova consist mainly of dainty, luxury pieces, However, none of her collections go without motley cotton dresses and t-shirts that bear some really exclusive prints, which she creates herself.