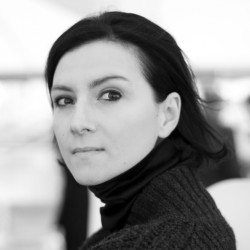 Elena Burenina is young promising designers, who quickly gain popularity in the field of Ukrainian fashion industry. First time her name has become known to public during the Ukrainian Fashion Week event in 2006 as a winner of 'Fashion Seasons – Look Into Future' award. Then her collection 'Ambivalent Archetype' was highly appraised by a fashion expert, the chairman of the competition Allison Mellownie from London.

In 2007, Elena presented her two new collections at the Ukrainian Fashion Week – 'New Names' and at the 'Fresh Fashion' projects. Her collection 'Spring-Summer, 2008' with distinctive Japanese motives, caused a wave of appreciation, the chain reaction of excitement on the first days of presentation. The collection photos could be seen at the front pages of the popular internet sites in France, Italy, Spain, Japan, Korea and as far as Brazil. This collection was shown at the 'Sarajevo Fashion Week', where it caused an emotional storm and excitement of the guests, which included the house of Kenzo representatives, and the creative director of house of Agatha Ruiz de la Prada. Elena's collection 'A soul in Megapolis' was also presented at the International Fashion Festival in Italy in 2008 and received the first prize.

In the spring of 2008, Elena returns from Washington, USA, where together with the leading Ukrainian designers she presented her collection 'Autumn-Winter, 2008/09', specially created for the 'DC Fashion Week' event.

Bright and festive cruise collections 2008 and 2009 as well as a deep and full of energy Fall Winter 2009-2010 collection 'AFRICA' provoked a storm of positive emotions, new progressive ideas and constructive solutions.

In 2009, Elena Burenina won a TV competition among young clothing designers 'Pro Fashion' and passed her internship in Central Saint Martins College of Art and Design in London – the place of studies of John Galliano and Alexander McQueen.

All this is a very small part, the very beginning of the way of an artist and designer Elena Burenina. Very soon thanks to her professionalism and aspiration to perfection we will see many new…true works of art instead of simple clothes.