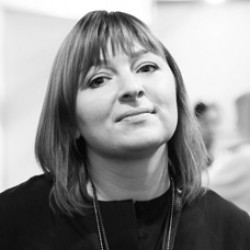 In her 23 Christina Bobkova has founded her own line of clothes under CB-design brand. Trendy jersey clothes in side-long cut – that's what made Bobkova clothes recognizable among the rest of designers. For several following years the designer was forming her individual style, but jersey has stayed the favorite fabric of Christina. Apart from that the designer stepped beyond the borders of the catwalk and discovered showbiz opportunities: she was creating the costumes for the first Ukrainian Broadway-style musical 'Equator', and then she continued with TV projects on the leading Ukrainian TV channels, 'X-factor' and many other popular TV projects among them. Christina also was working as a costume designer of a movie by Ukrainian film director A.Mateshko 'The Trumper'.

Since 1998 BOBKOVA. brand has been a resident of Ukrainian Fashion Week with prêt-a-porter collections. F/W2010-11 Bobkova. collection was highly estimated by . 'L'Officiel' magazine and was awarded by Marangoni Institute – the most prestigious European School of Fashion and Design (Paris). Later Christina carried out her studies in this Institute. BOBKOVA. brand was presented at WHITE exposition (Milan) and COTERIE (NYC), the designer participated in Festival della Moda Russa (Milan).

Since 2014 the brand is each year presented within Florence Deschamps showroom (Paris).